What boys do… Part 4 – Run their mouths  #boys2men 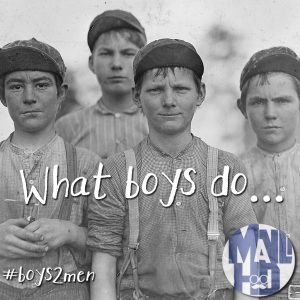 Today we’re going to talk about RUNNING YOUR MOUTH.

Loose lips sink ships. This is not only true about accidentally spilling government secrets – but about the power of talking too much.

I think the key to keeping our speech at a minimum is learning to T.H.I.N.K. before we speak!

I – is it Inspiring?

N – is it Necessary?

So often, the speaking we do can tear people down, not build them up. It can reveal more details than we should. It can create an image in the minds of others about us that push them away from us. It can create self-defeat, by establishing a negative attitude in ourselves!

Boys don’t think before they speak. Men carefully use their words to bring life.

This week we’re going to talk about WASTING TIME.

When we are young – time seems to move slower. My friend Mike McAvoy says that life is like a roll of toilet paper – and it goes faster the closer you get to the end of the roll.  Now – Mike is a preacher, not a physicist – but it seems to make sense enough to me.

There is nothing wrong with boys who spend their vast amount of slow-moving time tossing baseballs around, or playing cops and robbers, or building with plastic blocks, or catching fish.

But when a boy becomes a man – and his time starts to move faster – his time becomes currency. And a man uses his currency and his time wisely.

Does that mean he abandons all leisure pursuits? Certainly not! It’s perfectly acceptable for a man to sit on a shore with a hook in the water, waiting for a fish.

But what it does mean is that he is intentional with his time. Every minute spent is used for a greater purpose. Leisure is not about wasting time – but rather about recharging yourself spiritually, physically and mentally. We use our leisure as an investment in ourselves and in our families.
If we make it a point to manage our time, we find ourselves less stressed, and more productive.

Here are some time management resources:

How to Use Google Calendar for Better Time Management

Boys waste time. Men use their time wisely, and invest it as currency.

Tune in next week for Part 4 of “What Boys Do…” – Run their mouths.

This week we’re talking about FIGHTING.

Certainly – there is a time and a place for that glorious moment that a bully or a tyrant receive a blow to the nose. I firmly believe that when people say, “Violence is never the answer” they forget that there are things worth fighting for – and there are people who need to be corrected with physical force.

But we’re not talking about fighting for a greater purpose. We’re talking about the schoolyard scrapping, and drunken brawls, and incessant need to win every argument – whether by force or sheer ego.

Many times people fight for the sake of proving their strength. Real men do not need such victories to define their worth.

If I’m minding my own business, and a man physically assaults me, I’m going to defend myself, and I’m going to do what it takes to win. But fighting and arguing and winning should never be what drives me, or motivates me.

A man should be secure enough in his self and in his own strength that he doesn’t need to pick fights and push his way to the top.

The truth is – you can be right, and you can be better than everyone else in the room, without it mattering whether or not everyone knows it.

The first one of those behaviors? Whining

Obviously – men do this. It is a behavior that didn’t just “die” with the onset of manhood – but it should.

I don’t think that identifying something that is wrong and needs to be repaired is the same thing as whining. It’s okay to identify a need, talk about solutions, and then implement solutions.

Now that we’ve established that- let’s talk about whining.

Boys who don’t get their way complain about it.
Men learn to deal with it, and find solutions to problems.

Life isn’t fair. It’s true, and you still have to deal with it. Whining about it rarely levels the playing field, but learning to rise above it is the ultimate reward.

Firmness in enduring and exertion is a character I always wish to possess. I have always despised the whining yelp of complaint and cowardly resolve.

The tendency to whining and complaining may be taken as the surest sign symptom of little souls and inferior intellects.

If you want to behave like a man – you won’t whine. Complaining changes nothing but other’s attitudes about you.