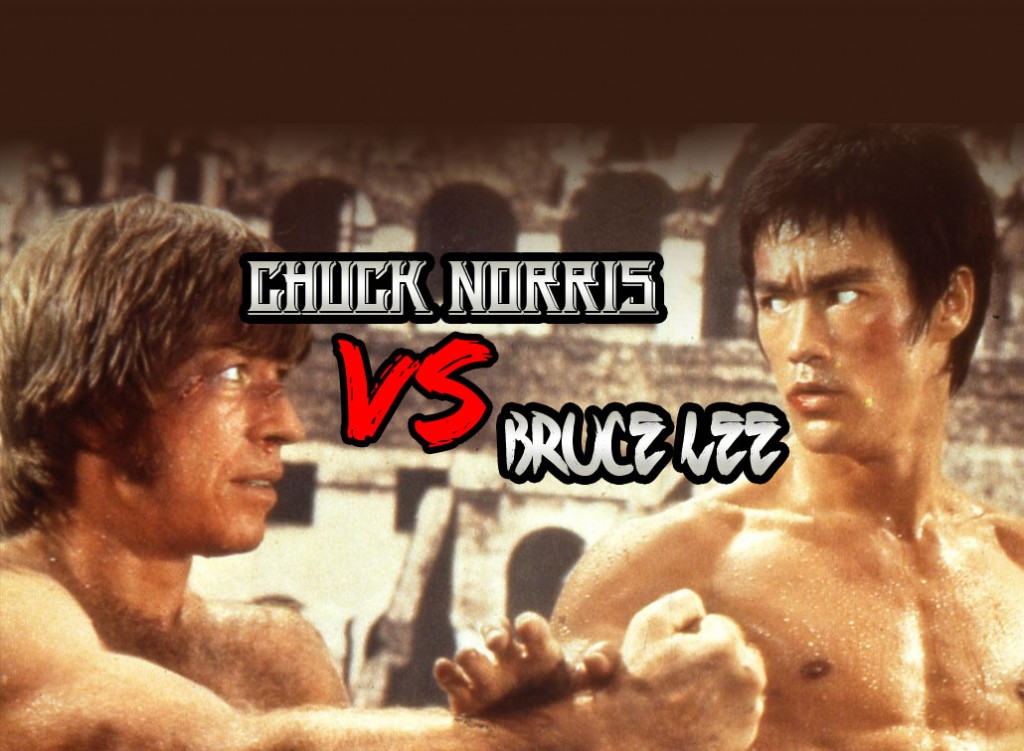 I remember being around ten year’s old watching martial arts movies with my best friend Marc.  He was a huge Bruce Lee fan, and I idolized Chuck Norris. We used to argue all the time about who would have won in a “real” fight. I say “would have” because this was in 1990 and Bruce died in 1973.  Who would have thought that I’d find that answer out years later from those who knew both of these gentlemen?

Many people base their opinion about these two martial arts icons off of the movie Return of the Dragon where they fought each other at the end of the movie, and Bruce ended up killing Chuck.  Because of that movie some people feel Bruce was superior. They forget that it was only a movie.  Bruce was abnormally gifted.  He was a little guy at 5’7” and 146 pounds who hit like a heavyweight and was arguably the fastest striker this planet has ever seen.  He certainly was nobody to mess with, but neither was Chuck. Chuck was the first American to ever receive a black belt in a Korean style (Tae Kwon Do), which was an amazing feat.

Bruce was phenomenal and certainly the most iconic person in martial arts history, and he has done the most for the industry in my opinion. Joe Lewis, the greatest heavyweight kickboxer of all time (and one of my instructors) trained with Bruce many times.  Joe was a world champion Karate fighter before he even met Bruce.  Bruce asked him to become a student under him.  Joe liked what Bruce had to offer so he did.  He learned from Bruce for around two years.  There have been times where Bruce took credit for Joe Lewis’s success. Joe was already a champion before he started training with Bruce.  Joe mentioned in an article one time that the image of Bruce was much different than the reality of Bruce.  He never fought in the ring, but many of those who knew him say he would have done well.  He was phenomenal, but he never proved himself the way Chuck Norris, Joe Lewis and Bill “Superfoot” Wallace have.  “Bruce was not a fighter,” Lewis said in one interview. “He was an actor and a teacher. He was a great teacher.”

According to Chuck Norris, he and Bruce “sparred.”  If you are not familiar with that term, it simply means that they fought each other in a friendly fashion outside of a sanctioned tournament or match.  Usually you go about 80 percent or so and if you daze your sparring partner you back off and let him regroup.  In a real bout you go 100 percent, and if you daze him, you do whatever you can to finish him within the context of the rules.

Bruce never believed in high kicks. Chuck was a black belt in a Korean style (known for high kicking) and he educated Bruce that if he learned to kick high it would make his lower kicks a lot better.  Bruce ended up loving high kicks after that.  During the sparring session Chuck got the best of Bruce and kept hitting him with a certain kick.  Bruce got frustrated and said, “You keep kicking me. How can I stop you from doing that?” Chuck replied with, “You could move.”  The old adage, “The best defense is to not be there” comes into play here, which  means that if someone is firing a punch or kick at you, just simply moving out of the line of fire is the best response.

My professional opinion comes from three of my instructors who actually knew Bruce Lee and worked out with him (Joe Lewis and two others).  My one instructor did very well against Bruce. The other instructor actually sparred Bruce, and then ended up fighting Chuck in a tournament. I remember one day I was with this instructor and a commercial came on that Chuck Norris was in. He looked at the television and said, “He kicked my ass.”  Then he proceeded to say that Chuck Norris would have ruined Bruce Lee in a fight.  This instructor said that when he sparred Bruce it was a pretty even match.  Bruce caught him with a good punch and then he kicked Bruce right in the balls and dropped him.  He then said when he fought Chuck, it wasn’t pretty. Chuck kicked his butt. By the way, this instructor of mine is certainly no slouch. He was one of Elvis Presley’s bodyguards.

So, according to a man who fought both of them, Chuck Norris would have beaten the tar out of Bruce Lee. Some others will disagree, but what really matters is that both of these fine men have done more for the martial arts industry than anybody else (primarily because of their movies) and both have learned from each other. With all that being said, let us never forget that Chuck Norris was an only child…eventually.

Michael Miller is a freelance writer, author, and international self-defense and personal protection expert holding a 5th degree black belt in American Kenpo, which is a modern street based martial art. Miller holds a Bachelor of Arts degree in writing with a minor in sociology from the University of Pittsburgh. He has authored several books along with numerous magazine feature articles for international magazines.