What if you have no example? Be a Mentor 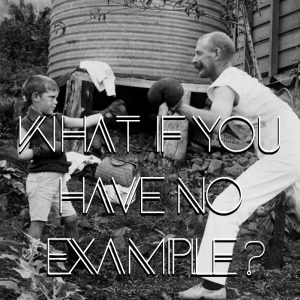 I’ve been very fortunate to have a good dad, who raised me well.
Not everyone has that luxury. Not everyone has a good example, and so they often find themselves scratching their heads wondering how to be a better man, without a good father figure to use as a template. Here’s my advice for those guys.


Last week we talked about living in community with other men – make sure that part of that involves inviting younger men that you can mentor. Men that need an example. I’ve found that often – the healing is in the helping – and the learning is in the teaching.

Sometimes, just being there for someone else, having someone count on you, is the missing ingredient to becoming a man yourself.

Being a mentor doesn’t involve deliberately saying, “Hey, let me mentor you!” It just means you invite someone into your life to be a friend, and make sure you model a good example to the best of your ability, and you answer questions and offer advice when it’s appropriate.

I have a lot of young men tell me, “Man, I just don’t have any friends my own age!” And they utter it with an disgust and a longing for community. I explain to them, Listen – as you become a man, you realize that your friends are often five to ten years old, and five to ten years younger. Make it a point to learn from the older ones, and teach the younger ones!

That being said – no relationship is ever only one way. Sometimes you’ll learn from the younger ones, and the older ones will learn from you.