We’ve long said that March comes in and goes out inversely like a Lion or a Lamb. The thought of being one or the other may be a bit frightening for men. Especially in a culture that no longer appreciates the fierce and bold virtues that once marked manhood.

Lambs are weak. Lions are strong.
As we explore this concept, I will admittedly tell you, most of the time, I think we should err on the side of the lion. I think that we should strive to be brave, and fierce. We should strive to lead the pride, rather than to frolic in the fields, and cower at the thought of wolves.

A hardened soldier can indeed have tea with his daughter, and can indeed love a woman gently, and can indeed hold back the power and rage in order to communicate with his people diplomatically. Perhaps these qualities aren’t really “lamb-like” after all – but they are certainly not wild.

“For after years of living in a cage, a lion no longer even believes it is a lion . . . and a man no longer believes he is a man.”

― John Eldredge, Wild at Heart Revised and Updated: Discovering the Secret of a Man’s Soul

When I was a child, my dad and I loved to wrestle. His strength was and still is baffling. I’ve watched him lift things no man should lift. I’ve felt the strength in his grip. As we would wrestle, he’d show me that strength, but it was always measured and held back. I always knew that this man had the power to crush my little skull with his bare hands, and the fact that he didn’t showed me more about his strength than anything. He was wild like a lion, but he was tempered.

As we explore what it means to be a lion, and what we can learn from the lamb – let’s strive to be balanced. Let’s strive to be men who embrace the fullness and wildness that is in us, but we must keep it tempered and in check, because that is what a good man is. Each use of our strength and wildness is carefully measured and used in ways that make those around us better, and keeps them safe. 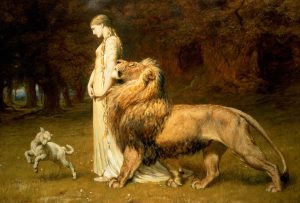 Martin Luther –  #mancrushmonday You can learn from the most unlikely people. You won’t believe this story!